Shrinking a thin-provisioned VMDK on a datastore with vmkfstools 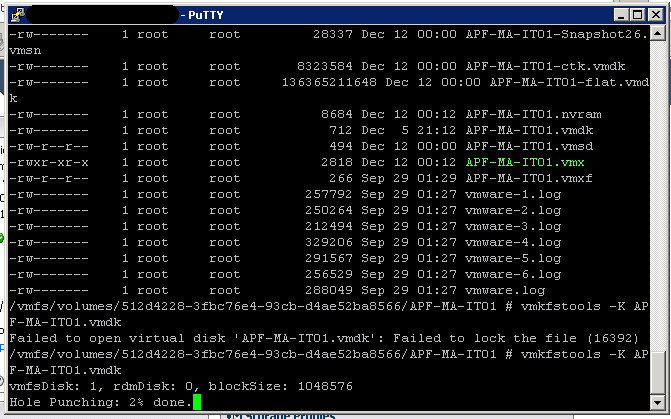 VMotion to another datastore didn’t work:

Just trying to shrink an already thin-provisioned Windows XP VM which is using only 10GB of a 127GB C: drive

I tried to run defrag, sdelete and then shutdown the VM and vmotion to another datastore with a target disk format of thin-provisioned  but this failed to reclaim the free space from the VM. By that I mean that the VMDK still used the same diskspace it originally did when it got to the target Datastore.

Instructions from the web

So next step was following instructions from http://www.blackmanticore.com/a30e8ac2ca8f942da4c9b058d92fa089

Problem when trying to run vmkfstools

After running a defrag on c: and sdelete -z c from inside the running VM and shutting it down to complete the vmkfstools -K [disk].vmdk I got

After investigating I found that Backup exec had taken a snapshot of the VM so that it could complete its backup. The fix was to wait till backup exec had completed its backup and removed the snapshot, and therefore the lock it had on the vmdk files.  I could then start the vmkfstools -K [disk].vmdk process

How I did the full process: