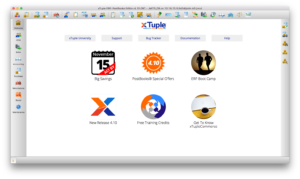 So for a while I was using Simple Invoices to raise invoices for my Small IT Consultancy Business. However in a short space of time I found that it just didn’t have the bells and whistles that I needed. Being an avid fan of Open Source software I looked around and wanted something with a lot more power and a client that would run on Windows / Mac / Linux. That is where xTuple Postbooks Edition came into the picture. You get the client from https://github.com/xtuple/qt-client/releases. I use a Synology Diskstation to house my business files and so I installed Docker and configured the xTuple Postbooks Edition database to run inside it.

The good thing is that there is a Postbook Quickstart database which has a nice pre-configured database with settings and a chart of accounts setup ready to go (with a small amount of configuration). The bad part is that if you, like me don’t have a very active accounting gene then when you install the database, and get the client pointed at it, you then are left with a very powerful tool which you have no idea how to use.

But all is not lost there is a very nice xTuple for Service Businesses guide which contains most of what you will need to know to be able to get running. However I find that because my business is small, I tend to only use some of xTuple Postbooks functionality. For example I don’t use Sales Orders or Purchase Orders. I do raise Invoices and keep track of what I have done for who using projects and the time and expense module. To keep track of expenses that the business incurs I use Misc Vouchers. So although the above mentioned documentation is very good you still have to create your own tailored usage documentation. I find screen casts especially helpful when you implement a new process in xTuple. If you only raise a few invoices every few months, trying to process something like a credit from memory after a long hiatus can cause problems.

I find with any sort of ERP system that you need to process things the same correct way each time. Otherwise you get headaches.

While using the xTuple Postbooks edition I have found bugs but no show stoppers. After reporting these bugs they tend to be fixed one or two releases later.

Upgrading has been a simple process of backing up the database restoring it to a test instance, running the updater with the latest update db patch, downloading the latest client and running test transactions against the test instance to see if it all works OK. And then, all being well, duplicating that on the live database.

Probably my favourite part of Postbooks has been learning to use the Report Writer. Although not as full featured as some of the ERP reporting forms systems I’ve used xTuple Postbooks Edition can create nice looking documents.

What I’ve found missing has been email from the Postbooks Edition application. But because the “connect” module brings a whole load of enterprise EDI transaction and integration functionality along with it xTuple the company rightly wants real money for it. So for now I just print my Tax Invoices to PDF and use a Perl script to format and send them manually

Probably what causes the most angst for me using xTuple Postbook Edition is that it was designed originally to run as a manufacturing ERP. What that means it expects you to buy raw materials, make them into a product, stock the product in a warehouse and then ship that product based on incoming customer orders. As I run a service business which doesn’t really make anything you have to map what Postbooks is expecting to your reality. However the aforementioned Service Business Guide provides the key to successfully implementing it for my business.

Now that I have used it for a while I can see how it would work as a solution in a manufacturing business. It seems to have all the modules that I remember I used when we had QAD Systems running. In fact I think they might be somehow related. QAD used to be call mfgpro and xTuple was originally known as openmfg.