We have been slowly refining our Chook Pen and Coop.

The first thing we found is the girls didn’t like how exposed the nesting boxes felt and weren’t using them. So we stapled a privacy curtain to front and put small cutouts in them to allow them to enter. They now seem very happy with the nesting boxes and have stopped laying eggs in the corner of the coop under the roosts.

Also leaving the feeder outside was an open invitation to the local Doves and other birds to have a feast on us. So the feeder is now mounted in the Coop. 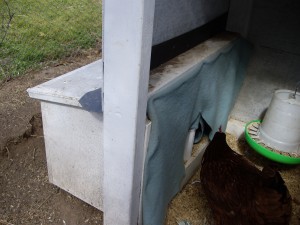 We get cold nights sometimes (-3 deg C) so we put a curtain on the door to stop draughts. It took a few attempts for the girls to work up the courage to go through it, but now they are cool with it. 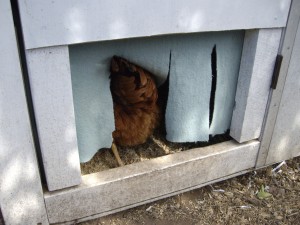 Because we got two little Isa Browns to make up for the sad departure of a White Leghorn / New Hampshire cross we had to segregate them from the big chooks for a while. The neighbour lent us a rabbit hutch which we have been using as their cage / sleeping quarters.

Now that they are a lot bigger, they can cope with the bigger chooks and have even started sleeping in the coop with their older sisters. The Rabbit Hutch is now used as a way of keeping their special pullet food from being eaten by the big chooks. We adjust the door to be just big enough for them to squeeze into, and keep the big chooks out. The big chooks love Pullet mix but don’t seem to like Layer Pellets as much. 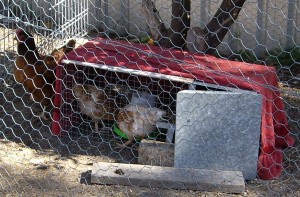 I thought that I was going to have to segregate the Pullets from the Adults for a long while so I put a divider in the run made out of old galvanised wire pool fencing. I ended up only using it for a few days. 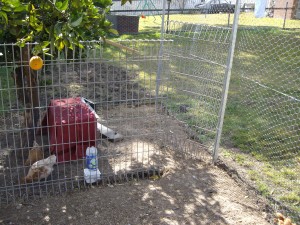 A test. This is an edit done from a Samsung Galaxy 10.1 Tablet.l

Our newly acquired Silkie has layed two eggs. They are quite small and cute. Another dozen eggs and there will be...