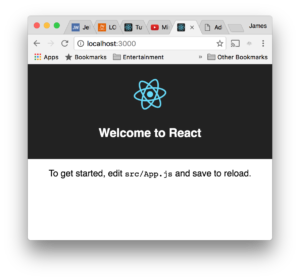 So I just learn’t that there is a command that can create a react environment quickly and easily. And it includes the cool web server that reloads every time you edit your component code and also it has a build command to compile it to production….  A lot easier than following a multi-stage tutorial on how to install all the components individually. Just two commands and you are away. Firstly you need node installed and then you do the following two commands.

← Prev: Atom Text Editor - I may have found my netbeans replacement Next: Setting the Apache 2.4 PATH environment variable in a brew services started httpd process →

In your view somewhere enter <?php dd($this->Form->getTemplates()); ?> Reload the page and then you can view the...

Use a Value Object in your Entity Accessors