Dubrovnik to Praiano in One Hellish Maneuver

As previously mentioned we spent a day and a night in Dubrovnik.

So the next target was the Amalfi Coast in Italy Specifically a Holiday Apartment in Praiano ( which is beautiful by the way – it’s clean, it’s stylish, I feel beautiful here ).

To get here is where the epic begins. An uneventful smooth Ferry trip accross the Adriactic Sea from Dubrovnik to Bari in a nicely refurbished Car Ferry ran by Jadrolinija the ubiquitous and very Catholic Croatian Ferry Company. (with 1200+ (don’t quote me on that number) Islands Ferries are a critical part of the make up of Croatia).

Customs out of Croatia(Dubrovnik) and into Italy (Bari) was uneventful.

But then I turned right when I got out of the Bari Ferry terminal and walked 1.6km the wrong way the roads appeared to join but actually there was a fence between them. 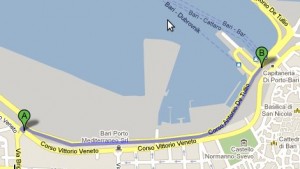 After retracing our steps and getting out of the port we had a several km walk to Bari Centrale Train Station. The walk was OK but once we got to the train station we felt underseige. Young males looking at everyone like lions look at prey, roving in groups, looking for unaware travellers. Man I hate thieves and pickpockets.

We sat at the station with the Bums and Hobo’s for an hour or so but in the end retreated to the McDonald’s Restuarant which had it’s own body gaurd. Bari just doesn’t feel safe.

This wasn’t helped because of an expat brit in Dubrovnik who told us of his experiences in Bari where-by his wife had her expensive bag stolen by guys on scooters.

So eventually our nervous 3 hour wait for the train from Bari to Casterta ended and with much relief we boarded the train. What followed was a 4 hour train trip in a sporadically air-conditioned regional train. With much jealousy I watched a guy sit in the same cabin as me and fall promptly to sleep. When we arrived at Casterta again we were confronted with a 2 hour wait and a station full of Sleeping Africans. This was not nearly as a threatening environment as Bari but at 4am in the morning I could have wished to be elsewhere.

Boarding the train to from Caterta to Salerno was a relief. It again was a regional train stopping at all stations. If at all possible in the future I will cough up the extra Euro (â‚¬) and catch a Eurostar train – They rock!

Finally arriving at Salerno we hopped on two buses for Praiano (only later we discovered we could have done it on one bus – oh well). I didn’t know that bus tickets are purchased in shops and not on the bus this caused a ruckus as I had to run to the shop and get tickets while the bus waited. Argggh.

I took comfort in the fact that I wasn’t the only one to have gotten caught by this arrangement in a lot of other places we went (Croatia) the tickets are bought on the bus.

The Amalfi coast Bus drivers know the road and where their bus in on the road… It takes a while to become comfortable because of not being used to the limited clearances that the bus drivers take for granted.

← Prev: Blog Fail Next: Some Notes on Italy →

Some Notes on Germany

Germany Stayed at a friends house in semi-rural germany Moers (I think). Went to a Roman ruin nearby and saw almost...

Some Notes on Italy

I have attempted to Blog about our trip 'as it happened' but moving around and not getting WiFi at convenient times...