A while ago I blogged about a Control system that commits a C Struct to a file on a disk and then reads the file and enters the C Struct data back into the control system.

And so I have had to investigate. After much trial and error I found a quirk that is unique to Windows C Implementations that was causing an issue. It relates to how fwrite and fread write and read data to and from disk.

Basically the file was being written and any special characters it saw that it thought were \n characters e.g. 0A it was adding the (correct for windows) matching carriage return \r 0x0D character. Which effected the offset at which the data was written and made things wrong, really wrong, when it was then opened for reading.

The solution was a change to the fopen calls.

So once you change the fopen to rb or wb then the fwrite or fread will avoid doing any translation and just write/read the values as they are.

Here is an example of file written with f = fopen(filename, “w”);  Note the extra byte at the end of the file. Here is an example of file written with f = fopen(filename, “wb”);

Notice how although an 0A character appears in the data on line 640 in the first block of bytes fwrite doesn’t try and make it windows line ends by adding a 0D and thus the values maintain their correct offsets and can be read correctly back into the control system. 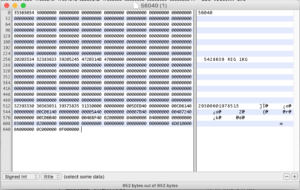 ← Prev: Struct is 652 Bytes Fwrite writes 656 Bytes Next: X-Recruiting - Who would have thought →

Just putting this here for future reference. For the record the reason I did this test was because I have a Ubuntu...

CakePHP 2 Form and trying to POST to it using curl This is what I am trying to duplicate with curl...

I have another post that is VSCode on Windows 10 SSH into remote host and working in the project source directory then...