I log in to a Windows 2012 server to use an EDI application ( OpenText Freeway) that creates printable orders and it would be nice to be able to print them from the rdesktop session I have running from my Fedora 20 box to a local printer.

I found despite specifying the correct printer option on the command line that I couldn’t see the redirected printer port when I went to add the printer in Windows 2012.

I found a  thread on Serverfault http://serverfault.com/questions/522991/rdesktop-to-windows-server-2012-from-ubuntu and it mentions that to share your local disk with the remote windows 2012 server you need to add a sound option. So I thought I would try it to resolve the printer re-direction not appearing problem. As the post mentions you need to specify -r sound:local

The name of the printer: option is arrived at by issuing lpq on your local linux box. This will give you the name of the default printer. If you want to use another printer lpstat -a will show you the ones you have available.

The =”Drive name” option is the name of a print driver installed on the 2012 server compatible with your local Linux/Cups connected printer. (Typically this will be a Postscript Driver)

Once you connect rdesktop to your Windows 2012 Server you may need to go into the Devices/Printers control panel and click Add Printer and specify a printer driver. However if you specify a driver that exists on the server (with the exact driver name such as  “KONICA MINOLTA PS Color Laser Class Driver” to rdesktop)  it should automatically add the redirected printer and make it the default. The reason that I add the Konica Minolta PS Color driver to the Windows 2012 server and specify it instead of the correct HP Postscript driver is because I found the HP “Postscript” Drivers under Windows 2012 send PCL commands before the postscript print file and when the print file reaches the local cups instance it prints the Postscript file as text.

You should be able to see the redirected printer port as the below image shows. If you have to manually add a driver you need to select a Postscript driver. 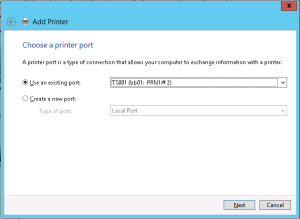 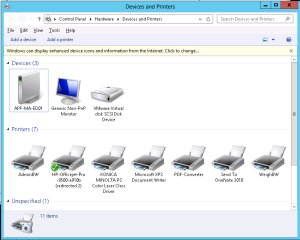 Just upgraded to Windows 11 and my WSL (Windows Subsystem for Linux) instance is visible in Windows Explorer _and_ it...

Before you Upgrade to Windows 11

Ever wondered what extensions you have installed and want to keep a list? This actually is a good way to audit your...